Why Temp Jobs Were Valuable Experiences for These Two Singaporeans

These jobs may seem disparate, but they are all part of Mr Brendan Goh’s work experiences.

Brendan, 44, started a human resources consultancy in Vietnam in 2018, but the COVID-19 pandemic forced him to close his company in 2020.

After losing the business he painstakingly built up, Brendan tried searching for a job in Vietnam. However, his search drew a blank, so he decided to return to Singapore in April 2020 for better prospects.

Here too, his job search proved unfruitful. “I sent out more than 1,000 job applications between April and December 2020 for a range of jobs in Singapore. They were mostly related to business development in industries such as human resources, outsourcing services and industrial sales,” he shared.

Meanwhile, to make ends meet, he took up a string of contract jobs. These included delivering goods for an e-commerce company that involved gruelling 12-hour shifts; cleaning fishing nets in a kelong off Pulau Tekong, and cutting up and deboning fish at a fish stall. He also worked as a mover at the airport terminal complex, starting his workday as early as 3.30 am, unloading cartons onto the conveyor belt for scanning.

According to Brendan, the toughest part about taking on the temporary jobs was psychological, more than physical. “The biggest challenge of holding a temporary job requiring manual labour was convincing myself that it is temporary,” he said.

Through it all, Brendan never gave up on his desire to pursue a career in human resources – his forte. He worked on adhoc headhunting projects whenever he could to stay in touch with the industry, as well as supplement his income.

Need personalised advice on the next steps of your career journey? Register for WSG’s Career Matching Services to speak to a Career Officer today!

Even though the temporary jobs were not what Brendan wanted, he appreciated their value.

Elaborating, he said: “Before 2020, I mainly did business development, HR planning and management. Most of the time, it was mainly about working smart and thinking out of the box.”

“But the temporary jobs were different — there was a direct relationship between how many hours I worked and how much I earned. This taught me humility where every hour spent at work counts, regardless of our occupation.”

He feels those hours weren’t wasted though. Working entry-level jobs gave him an insider’s view on the way different businesses work. This was something he did not have a chance to experience in his previous corporate job. 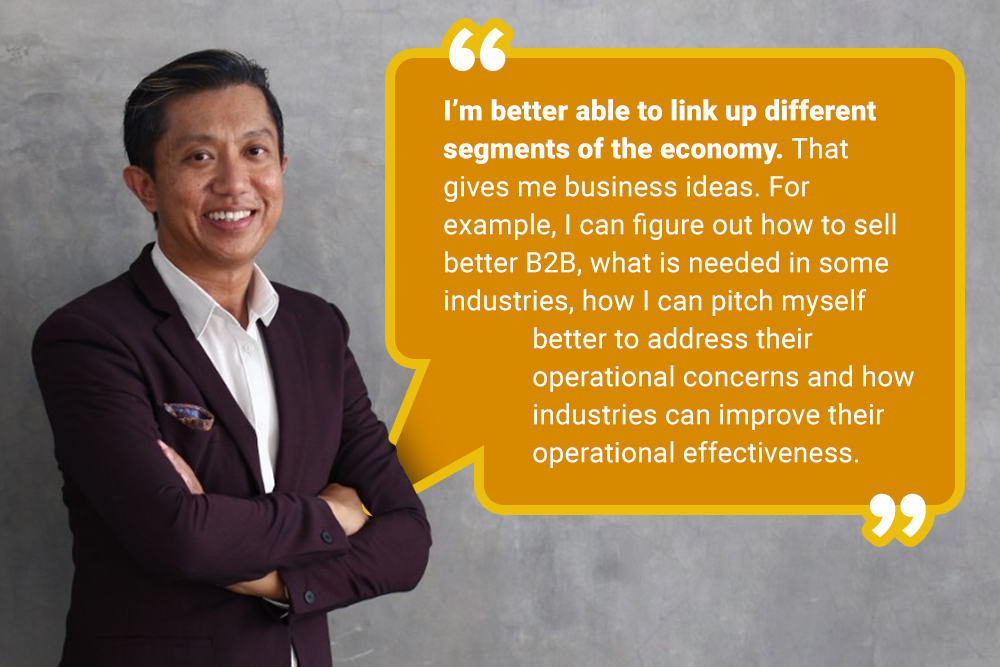 “I’m better able to link up different segments of the economy. That gives me business ideas. For example, I can figure out how to sell better B2B, what is needed in some industries, how I can pitch myself better to address their operational concerns and how industries can improve their operational effectiveness.”

The temporary jobs also forced Brendan to push himself further when he finally managed to secure a full-time job. He is currently working as a business development manager with EPS Consultants, a recruitment firm based in Singapore.

Like Brendan, other Singaporeans have also found themselves in the same situation, with temporary jobs providing the much-needed help and relief in between permanent roles.

One such person is Mr Vicknes Vinayak Veerappan, 46, who found himself badly affected by the pandemic.

Vicknes has been a freelance music instructor and performer since 1994. In 2018, he decided to take up a Bachelor’s Degree in music at Lasalle College of the Arts to become a music teacher in primary and secondary schools, and to fulfil his lifelong dream of becoming a music college graduate.

He was initially looking forward to joining a new company, after receiving his Bachelor of Arts in Music in 2020. But after graduation, the company retracted his job offer.

Looking for a job? Trying to ace that interview? Subscribe to our Telegram channel for useful career tips, resources and events!

The bad news got him down for some time.

Vicknes said: “There were nights when I lay in bed alone in the dark, filled with a million thoughts as I asked myself if this pandemic is going to take away everything that I have worked for over the past couple of years.”

But being an optimist, Vicknes decided to focus on what he could control by searching for alternative sources of income. For instance, he upgraded his home studio to produce video and audio content for the National Arts Council and other musical theatre companies in Singapore.

Apart from earning some income, the projects he took on allowed him to occupy his time meaningfully.

“The jobs certainly kept me afloat and busy, instead of letting my mind stray into depression. I also learnt to live within my means,” Vicknes shared.

These skills came in useful when he finally found a full-time job as a programme manager at OnePeople.sg, a non-profit organisation that advocates multiracialism.

Giving an example, he said: “As a programme manager at OnePeople.sg, I had to manage the organisation’s social media accounts. I could use some of my video and audio editing skills to produce in-house videos.”

He encourages other jobseekers not to give up even as they take up stop-gap jobs that may not be remotely close to their dream jobs. 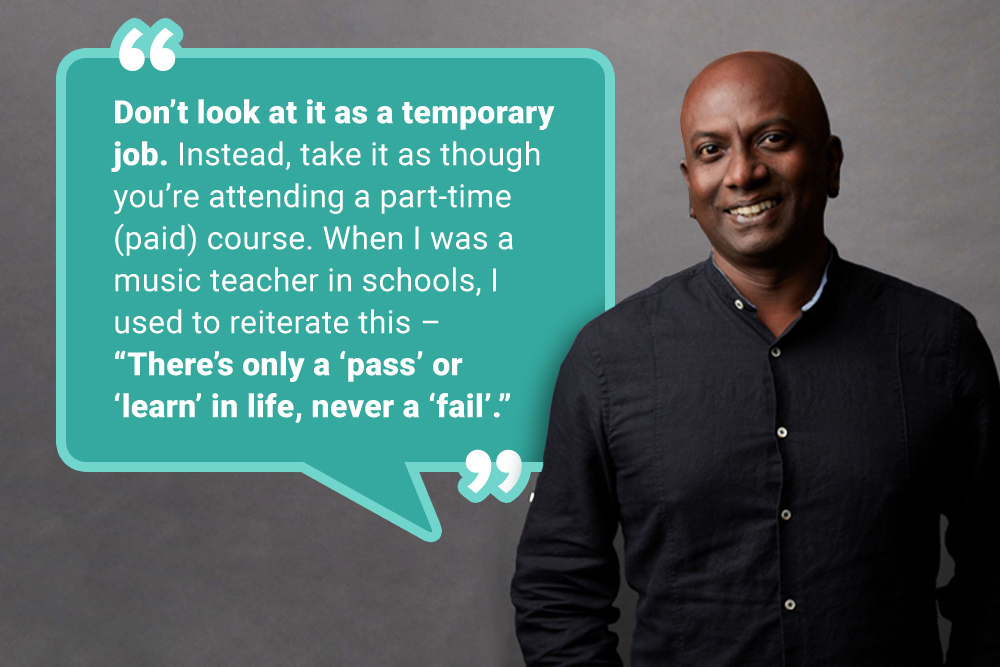 “Don’t look at it as a temporary job. Instead, take it as though you’re attending a part-time (paid) course. When I was a music teacher in schools, I used to reiterate this — There’s only a ‘pass’ or ‘learn’ in life, never a ‘fail’.”

First Job Tips: 7 Things You Should Do for Career Success

You Want to Make a Mid-Career Change? Here’s How to Plan a Successful Move

Home / Why Temp Jobs Were Valuable Experiences for These Two Singaporeans