Journeys of Resilient Companies: DNA of The Soup Spoon in Going Global

The Soup Spoon, a homegrown brand, was started in 2002 by three university pals — Andrew Chan, Anna Lim and Benedict Leow. Read their story of how they forged ahead against challenging circumstances to set up their home-based business.

45-year-old Anna Lim is an avid cook and perhaps if it had not been soup, it could well have been chicken rice that she may have gone into!

“I make an awesome Chicken Rice, chili and all and that’s what I actually wanted to do. But we started talking about trends in the West, and my sister-in-law who travels a lot also gave us the idea too about soup.”

Anna experimented with various recipes for about a year, using her colleagues at SGH to gather feedback. She then left her job and continued her soup effort out of her HDB flat. Her university pals, Andrew Chan and Benedict Leow, joined her and together they set their sights on becoming the “Starbucks of soup”. They started selling soup at a church funfair and did lunchtime deliveries to offices.

In time, armed with $250,000 and a shop at the basement of Raffles City, the first of many branches of The Soup Spoon came to be. Business was brisk.

The trio were young entrepreneurs within the age range of 25 to 29 years old. It soon became apparent that the food industry was a lot of hard work, long hours, and sleep deprivation. Anna recollects one time when she fell asleep at the traffic light.

“Then somebody opened the van door and actually woke me up asking if I was OK! They thought I had died from a heart attack.” There was no denying how tough it was.

A chance meeting on the escalator at Raffles City at 6am with Otto Wiebel gave her fresh ideas. Unbeknown to her, Otto was the Executive Chef at Swisshotel. He recommended a supplier for cut vegetables that would save her man-hours.

To this day, Anna continues with this supplier. The company as she says, “grew organically” as time went on. A second outlet started at United Square in Thomson Road. And then a central kitchen was set up for the 2 shops.

Diversifying sources and lessons from SARS

One and a half years into the business, Severe Acute Respiratory Syndrome (SARS) hit Singapore. Pasir Panjang Wholesale Centre had a case of SARS – the market was shut down. Supplies had been affected because she had not diversified her sources.

But there was a silver lining – soup is healthy, takeaways were popular. And here was an opportunity to pack the soups better – the take-home Soup Packs originated from the SARS outbreak – but so, too, a loss of $100,000 as they gave up the United Square outlet.

The business plan was re-visited and an extensive market research to redefine their target audience was also done. The next prospective retail space would be at Raffles Xchange. A health-conscious, clean-eating, marathon-running crowd made up the core customer base.

Raffles Xchange outlet did well. While there was a central kitchen now, there weren’t enough outlets to do the selling. High demand meant a ringing cash register, but demand would soon exceed supply.

Anna recounts the reaction of one, “I was told off by a customer who came 3 nights in a row after work for clam chowder. He told me off saying I had no business running a business if my soups sell out by 7pm.”

Years later when speaking at a seminar and recounting this incident that led to changes — a gentleman walked up to Anna and said he was the same complaining customer from back then.

Anna values these people who have contributed to the company’s success. She took those suggestions seriously. By 2008, sales turnover hit $7.29 million.

From 2016 onwards, the trio worked on increasing the shelf life and retaining the unique selling point of their soup packs. The move to invest in a High-Pressure Processing (HPP) machine was set and Commonwealth Capital came into the picture as minority investors. A separate company known as Souperfoods was created to widen its reach to the Halal market.

These were major moves and as Anna says, “The Soup Spoon was moving from a central kitchen to full-scale manufacturing – the transition was difficult.” But there was no denying the benefits. First, there was the export to Hong Kong and then there were the franchises in Taiwan — five stores.

Today, the internationalisation efforts make up 5% of the revenue currently. 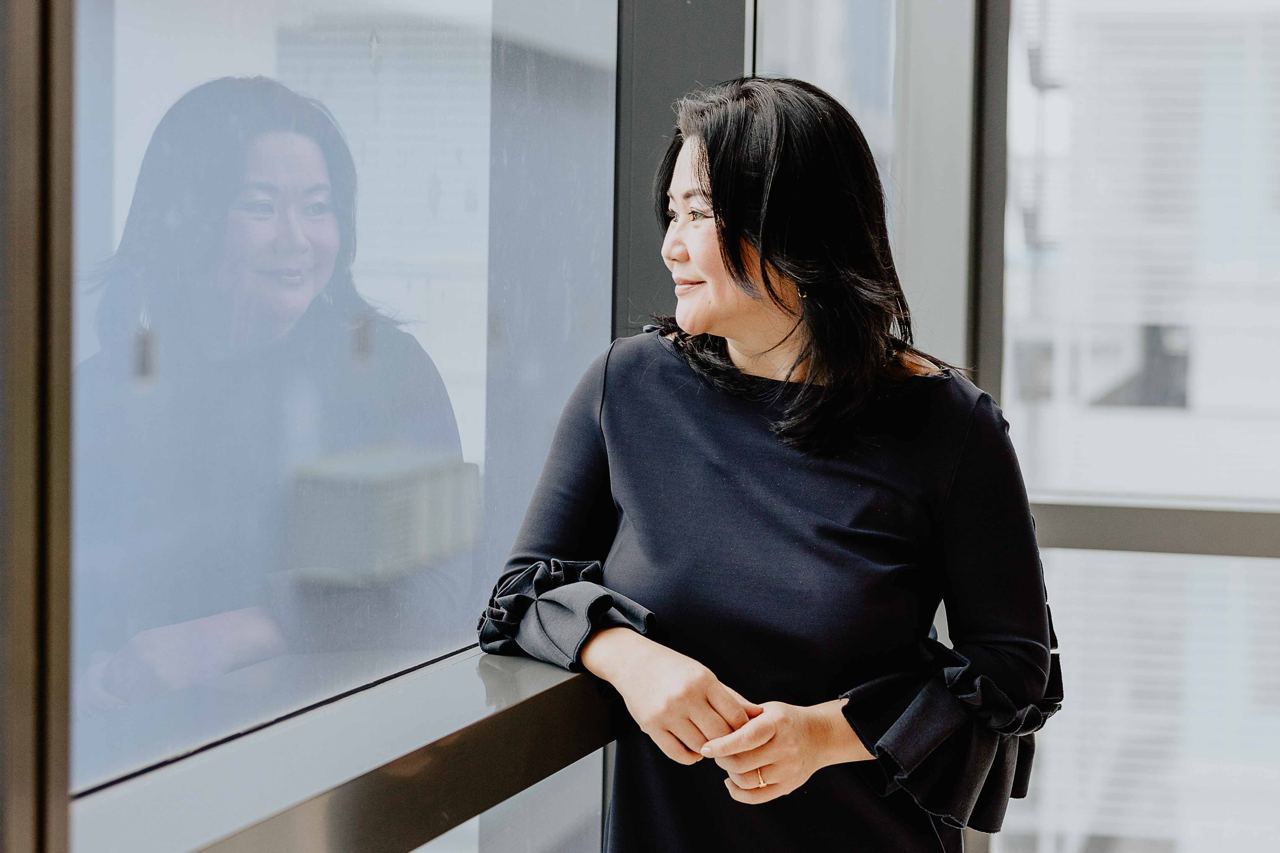 With the start of the COVID-19 pandemic, Anna worked off the playbook for SARS. She asked herself what would happen if the factory was shut down due to an outbreak. Production was ramped up, a warehouse was sourced, and more soup was stored.

Self-help kiosks had already been rolled out in the nearly 30 outlets they had. Delivery platforms from before carried their soups so they merely ensured enough products. Six new stores were opened.

And since soup was considered healthy, during the run-up to the circuit breaker and Heightened Alert, the supermarkets and their e-store saw brisk sales.

Without hesitation, Anna says COVID-19 changed a lot of things.

“Internationalisation is something we have started with our exports first to Hong Kong and then our franchise into Taiwan. We are hoping to grow this to be 30% of our revenue in the next  five years.” New markets include Vietnam, South Korea, China and the US.

The company is forging ahead also through the adoption of the Industry 4.0 (i4.0) technologies, which have been identified as one of the key enablers, to spur growth and enable manufacturing companies to develop new competitive advantages. (See FactBox below for details)

Looking at the IHCI, Anna says it was rolled out at the right time. “When the consultant comes in and scopes the work out, tapping into our data, and it then becomes a structured project with strong deliverables. It does make a difference to everyone in the company.” 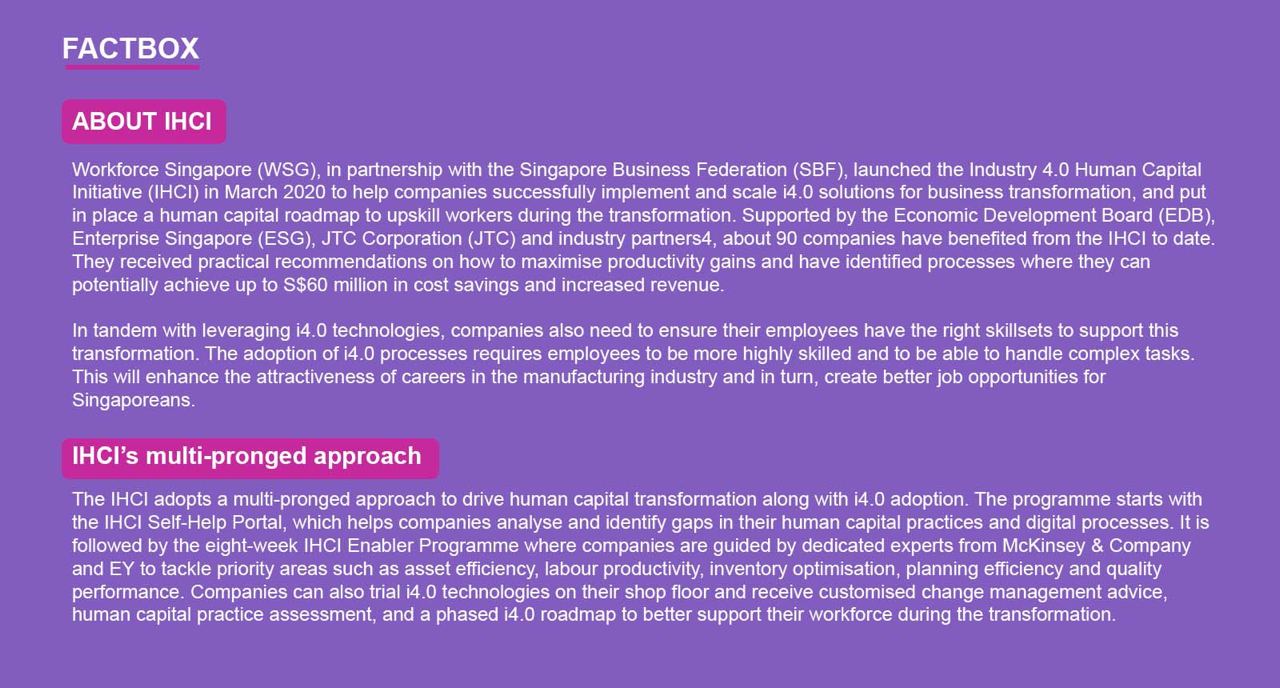 Want to be in the know of latest career tips, events and workshops organised by Workforce Singapore? Sign up for our e-newsletters now.
business strategycrisis management

Why Employers Should Consider Hiring Candidates With No Work Experience

Journeys of Resilient Companies: Corlison & Pearlie White Share What it Means to be ‘Made in Singapore’