Tour East Singapore, like others in the tourism business, reinvented and prepared itself for a future that remains uncertain. The pandemic cranked up the speed on the digitalisation process, making the company and its staff stronger and ever more resilient for the new normal.

Dominic Ong joined Tour East on 1 January 2020, right as the pandemic hit. He had been working and leading different arms of JTB prior to becoming Managing Director of Tour East Singapore. He even entered January on a high note. “In the single month of January, we had already achieved our first quarter revenue. So, me and my GM were saying to each other ‘oh we’re going to have a fantastic year – we will have lots of bonus coming into our pockets!’” Clearly that was not to be. 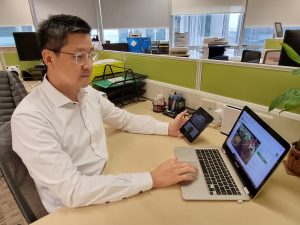 Dominic admits to thinking COVID-19 would blow over in 8 to 9 months, like SARS did. However, when the circuit-breaker was instituted, 2 things became apparent. First, the company which had all its marketing efforts happening out of Thailand were in a quandary when it came to pivoting the business and second, Tour East Singapore even needed to find out how #WFH was going to kick-in for their employees.

In the past, Tour East Singapore had tourists walking in and out of their offices, where desktops and manned desks were necessary round-the-clock. With the onset of COVID-19, the IT teams kicked into overdrive – upgrading computer processors, transporting and moving and setting up desktops in the homes of the employees. Split teams were created and became the norm as well. For Dominic, the pandemic was a wake-up call. “We could see cancellations coming in every now and then, along with refunds and soon, everyone was busy cancelling rather than taking new bookings. From April onwards, it was 100% cancellations only.”

Need support working through a difficult time in your career? Register to speak to a WSG Career Officer today!

Leaving the old ways behind

Before the pandemic, sales in 2019 came to SGD 35 million, while revenue stood at SGD 6.5 million. A year later, Tour East Singapore only had SGD 7 million in sales. As cancellations kept on increasing, Dominic knew they needed to get their act together fast if the company was to survive. Working with WSG, Tour East Singapore enrolled 6 of its employees for the Career Conversion Programme for Digital Marketing Tourism Professionals to change their current digital marketing processes.

After going through the training, the employees’ job scopes were enlarged and they are now equipped with the skills to manage their own social media platforms such as Facebook, LinkedIn and Instagram. “We started our own Singapore office’s Facebook page from scratch, then moved on to building an e-commerce platform and a booking site.” After the retraining, employees were placed in redesigned roles in digital marketing. They had to manage social media accounts, design marketing collaterals, prospect for new companies and partners to introduce business ideas and even collaborate with banks for staycation packages for their cardmembers. Tour East also started working with People’s Association’s staff club to promote staycation packages. The game plan was to move from their usual business model of B2B to B2C. A fundamental change had to happen if Tour East was to weather this storm, and it did so by retraining and digitalising where possible.

Have a job but want to level up? Achieve career excellence, develop your skills, and expand your knowledge with resources from Career GRIT. Check it out now!

Change in the mindset

The next step was challenging but doable – staff needed to multitask and at the same time, management had to trim the head count. 35 staff members were let go and redeployment of people was also necessary. Dominic saw the writing on the wall, with warnings that travel would not come alive until either 2023 or even 2024. But rather than let the pandemic cripple them, Tour East Singapore innovated and reimagined ways of reaching out to clients. “With the government’s help and WSG giving us all the support we needed during this pandemic, we even moved on to creating our own apps. Now all our daily tours are in this app and tourists can book them without even calling us.” As far as Dominic was concerned, to develop a digital mindset, it helps to be curious about emerging technologies around social media, big data, Artificial Intelligence, collaboration, and more. Tour East Singapore aims to create an even more appealing website, upload social media posts on its channels on a regular basis to grow its customer base and build its community, pick up storytelling techniques and plan a video production, as well as implement augmented reality into its product and service offerings. The company also learnt along the way how to develop a digital selling story and conduct sales to increase sales conversion in both the Leisure and MICE segments.

Changes in job scope can be seen through the eyes of a Reservations Sales Manager who used to be focused on working with Branch Offices and Sales Representatives on tour and hotel bookings, managing contracts and loading them onto booking platforms, and preparing tariffs. Now the Reservation Sales Manager has had her job role redesigned to help the company – firstly, develop a more appealing and search engine optimised branding website and secondly, create digital content for social media platforms to maintain constant engagement with B2C audience and enhance brand awareness.

Want to be in the know of the latest career tips, events and workshops organised by Workforce Singapore? Sign up for our e-newsletters now!

Robots and tour desks of the future

Keeping a lean workforce and finding the right technological solution for some tasks were the best way out for Tour East Singapore. Multitasking is now the order of the day. For example, when it comes to manning the tour desks at the hotels, Dominic envisages moving, walking-talking robots around hotel floors. “I want to place a robot at the hotel to service clients and instead bring staff back to the office. The robot will move around announcing the various tours and the company can then remotely control them.”

Dominic sees the robot functioning like a call centre where it will be possible to scan a QR code and then be guided to the app to make reservations. He has now gone as far as to write to the Singapore Tourism Board to pursue this and other such ideas. The future is indeed an experimental and exciting space for this company.

The programme is supported by Workforce Singapore (WSG) and developed in partnership with Nanyang Polytechnic’s (NYP) School of Business Management, with the support of Singapore Tourism Board. Visit to find out more about the CCP for Digital Marketing Tourism Professionals.

Journeys of Resilient Companies: Flo-Line Hydraulics Powers its Way into the Region

Covid-Friendly Christmas Party: 6 Virtual Activities to Up the Festive Fun