Why You Should Consider Taking on a Contract Job

Besides helping you to close the unemployment gap in your resume, a contract job offers plenty of other benefits.

For 48-year-old Mr Alvin Lim, a contract job turned out to be the lifebuoy he needed when he was retrenched.

Before that, Mr Lim, a father of two, was made redundant as a customer operations manager at a travel agency in 2019. Although he tried re-joining the semiconductor industry where he had worked previously, his attempts were futile.

Nevertheless, Mr Lim persevered in his job search. He also sought a WSG career coach and counsellor’s help before securing a contract position as a surveyor team leader. Since then, Mr Lim’s performance has impressed his boss so much that his contract was extended. 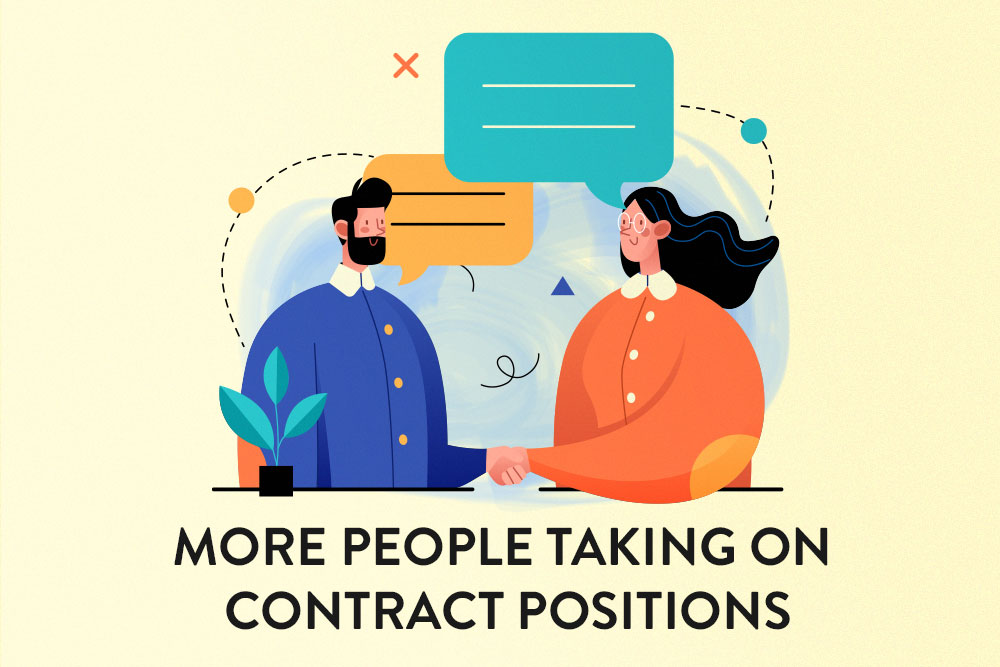 Mr Lim’s predicament is not uncommon. In today’s gloomy economic outlook, having a contract job helps to bridge a gap in your resume while you search for permanent employment.

In a nutshell, contract positions run for a fixed duration. They will be automatically terminated upon expiry unless they are renewed. Such contracts can be as short as a few days to six months or even a year. Given that these are temporary positions, companies may not offer the same benefits as a full-time position unless you meet certain criteria. This means that you might miss out on paid medical leave and annual leave. Freelancers may also fall under this category if they have signed a fixed-term contract with a company.

In Singapore, some people may prefer permanent positions for the job security it provides. But for industries such as IT and advertising, hiring contract staff is commonplace as some work may be project-based and require additional manpower’s help temporarily.

Additionally, contrary to popular belief that contract work is perceived negatively by employers, research by Robert Half shows that a significant majority of Singaporean CFOs are willing to hire someone who has worked extensively in contract roles. Randstad Singapore’s Covid-19 labour pulse survey 2020 also showed that close to 70% of working professionals in Singapore are open to accepting professional contract or project-based jobs given the current recession.

From a jobseeker’s standpoint contract jobs also offer the following benefits that can help your career in the long run. As a contract worker, you have the flexibility to decide the contract duration that you want to accept. For instance, if you only want to commit to a three-month contract period, you can search for such jobs accordingly. The same applies to your working hours.

Besides that, fresh graduates or mid-career entrants can use the opportunity to figure out if they will enjoy working in a new industry since the contract is a short-term one.

Another plus point of a contract position is its lucrativeness if you have specialist knowledge and experience. For instance, specialist recruitment agency Page Personnel lists IT Scrum Masters, financial controllers, change management leads and human resources directors as some of the best paying contracting jobs in Singapore. Contract workers sometimes take on multiple projects spanning different industries and different teams. These experiences hone your project management skills and force you to pick up new skills required for your contract job.  In the long run, you can potentially gain valuable industry knowledge and deepen your existing skills. Sometimes taking on a temporary position can be a foot-in-the-door strategy to enter your dream company, especially if you may not have the experience required by the company. For instance, a fresh graduate may have a better opportunity of joining a renowned company by taking on a contract role to showcase his or her abilities to the management.

Michael Page’s Singapore managing director Nilay Khandelwal also advises jobseekers to view a contract job as having the potential for conversion into a permanent position since employers are always thinking about their long-term hiring needs.

Additionally, joining different companies gives you a chance to network with more people. These networks can prove invaluable by informing you of permanent positions in their company, before they are even posted on job portals.

Ultimately, spending your time productively in a contract job is a good way to show hiring managers your resilience and adaptability in the face of challenges. These are all sought-after skills in today’s dynamic work environment. Besides that, a contract role is also an ideal short-term solution to continue earning while you concurrently look for a permanent job. Being engaged in work keeps your mind temporarily away from worries and anxieties. Given the value of contract jobs, it is not too late to start searching for them now!

Seeking employment help? Make an appointment to meet with a Careers Connect officer to help with your job search.
contract workJob Applicationjob search

The Basics of Budgeting During a Job Search

Ready for a Career Relaunch: A Mother’s Guide to Starting Work Again

Searching For a Job in Phase 2: There Are More Opportunities Available Than We Think